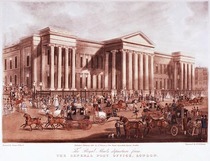 The first general post office in London opened in 1643, after King Charles I legalised use of the royal posts for private correspondence. It was possibly located on Cloak Lane near Dowgate Hill, in the City.

Later, in 1678, the General Post Office moved from Bishopsgate Street to a building in Abchurch Lane and remained there until the opening of this building on the east side of St. Martins-le-Grand in 1829, designed by Robert Smirke. Here Trollope began work as a junior clerk and here Rowland Hill transformed the Post Office into an efficient, greatly-loved institution.

Quoting from Mogg's New Picture of London and Visitor's Guide to it Sights, 1844, Victorian London describes this building and adds: "Here is the head of this vast establishment; but there are four branch offices, - at Lombard Street; Charing Cross; Cavendish Street, Oxford Street; and 266. Borough High Street."

First postmarks in the world

Inked date stamps were at first called 'Bishops marks' after their inventor, ...