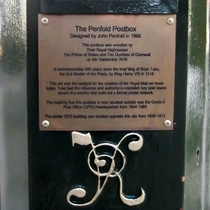 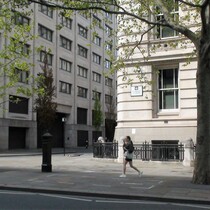 The Penfold Postbox designed by John Penfold in 1866.
This postbox was unveiled by their Royal Highnesses The Prince of Wales and The Duchess of Cornwall on 6th September 2016.
It commemorates 500 years since the knighting of Brian Tuke, the first Master of the Posts, by King Henry VIII in 1516.
The act was the catalyst for the creation of the Royal Mail we know today. Tuke had the influence and authority to establish key post towns across the country and build out a formal postal network.
The building that this postbox is now situated outside was the General Post Office (GPO) headquarters from 1894 - 1984.
The earlier GPO building was located opposite this site from 1829 - 1912.

Painted in the authentic green then in use, this is a reproduction of the Penfold design, first installed in 1866.

The building with the plaque, to the right of our photo, was the General Post Office (GPO) headquarters 1894 - 1984.

This section lists the subjects commemorated on the memorial on this page:
Penfold pillar box - EC1

Administrator. He was secretary to King Henry VIII and Cardinal Wolsey, and t...

Designed by John Penfold. They are distinguished by their hexagonal shape, wi...

This section lists the subjects who helped to create/erect the memorial on this page:
Penfold pillar box - EC1

This section lists the other memorials at the same location as the memorial on this page:
Penfold pillar box - EC1