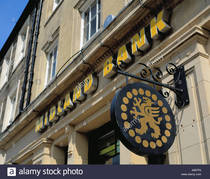 It was the 1891 acquisition of the Central Bank of London which gave Midland a seat in the Bankers Clearing House.

In 1965 the bank introduced its logo of a golden griffin surrounded by golden coins. The Midland Bank arms have one griffin and one dragon but no stag or lightening rods so we cannot explain all of the Lombard Street sculpture.

This section lists the memorials where the subject on this page is commemorated:
Midland Bank

Founder of the Ardath Tobacco Company.  Honorary Treasurer at the Royal Free ...