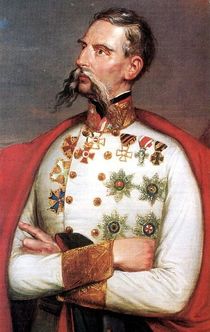 Born Kassel, now in Germany. Aged 15 joined the Austrian army, served in the Napoleonic wars and rose rapidly. His suppression of revolutionaries in Italy and Hungary including flogging women and executing many rebels. Successful but aggressive and ruthless, names for him included 'Habsburg Tiger', 'Hyena of Brescia' and 'Hangman of Arad'.

Having achieved high command in Hungary his temper led to many quarrels and he resigned in 1850 after which he travelled, but his reputation preceded him and he was attacked by mobs in Brussels and in London.

This section lists the memorials where the subject on this page is commemorated:
General Haynau, Baron Julius Jacob von Haynau

Governor of the Tower of London, soldier who fought in Ireland for William II...