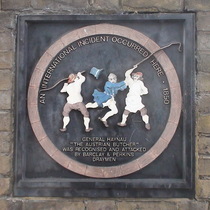 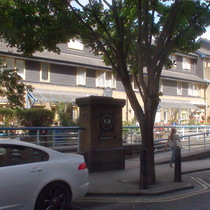 {Curving around the top:}
An international incident occurred here, 1850.

General Haynau "the Austrian butcher" was recognised and attacked by Barclay & Perkins draymen.

In the 19th century this brewery was on the elite tourist trail so in 1850 when Haynau arrived in London here he came. But his reputation for brutality preceded him and some draymen attacked him. We have found various descriptions of his ordeal: attacked with brooms and stones; pelted with horse dung; chased along Borough High Street by men shouting "Down with the Austrian butcher!" He took refuge in The George pub in Borough High Street, from where the police rescued him and took him to safety by boat across the river.

When Garibaldi was in London in 1864 he visited the brewery and thanked the dreymen. (Incidentally - we are very surprised not to have found a London plaque for Garibaldi yet. He must have stayed somewhere! Have you seen one?)

The figures and lettering on this plaque stand proud from the background, and the colours are painted on. Not a style of plaque we see very often.

This section lists the subjects commemorated on the memorial on this page:
General Haynau

Born Kassel, now in Germany.  Aged 15 joined the Austrian army, served in the...

{On the left side:}This is the site of the north east corner of "D" block, Ca...