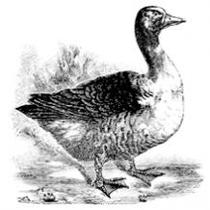 This is the story......During the early 19th Century one of the most celebrated characters in the Market was Old Tom, a gander from Ostend who came to England by chance, due to his fascination with one of the lady members of his flock. It is recorded that over two consecutive days 34,000 geese were slaughtered in the Market - but Old Tom managed to escape execution. He became a great favourite in the Market and was a regular customer at the local inns where he was fed titbits. He died in 1835 at the formidable age of 38 and was buried in the Market.

This section lists the memorials where the subject on this page is commemorated:
Old Tom

Leadenhall Market The meat and fish Market first occupied a series of courts,...