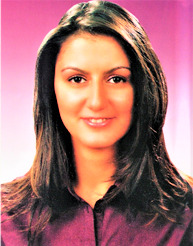 Gamze Gunöral was born on 4 June 1981 in Kadikoy, Istanbul, Turkey. She had only been in the UK for a few months as a student to learn English and was living with her aunt in Totteridge, north London. Her obituary can be found on the BBC News website.

She died, aged 24 years, on 7 July 2005 when travelling in the underground tunnel of the Piccadilly Line on the London Underground Railway between King's Cross and Russell Square underground stations that was targeted by a suicide bomber. The narrative verdict of her death can be found on the Coroner's Inquest Report.

Her body was taken back to Turkey for her funeral.

This section lists the memorials where the subject on this page is commemorated:
Gamze Gunöral