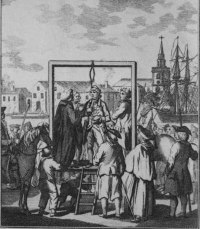 Execution dock is where, Frog blog says: "those condemned by the High Court of Admiralty were hung. It is not true they were all pirates, most were murderers or thieves." Its precise location is not known for certain. Competing sites are: the Prospect of Whitby (convenient for attracting customers to the pub?), King Henry's Stairs, or (less precisely) between Wapping Old Stairs (off Wapping High Street) and Wapping Dock Stairs.

Capital Punishment has an excellent page on Execution Dock, explaining the law and giving details such as "The gallows was erected on the foreshore at low tide and executions were timed to fit in with low tide." It points out that Execution Dock was the nautical equivalent of Tyburn Tree right down to the condemned man being paraded through the streets to his site of execution and being given his last drink on the way, for these watery miscreants this was at the Turk's Head. It also provides a list of the 78 men executed here from 1735 - 1830.

More information at BBC Autos. This explains that Execution Dock "... was the place of execution for those anyone {sic} had been sentenced to death by the High Court of Admiralty – which meant those who had committed a crime on the high seas, usually mutiny, murder… or piracy."

A London Inheritance has a great post about King Henry’s Stairs and Execution Dock.They dived deep into the maps and explain that what is now known as King Henry’s Stairs was previously known as Execution Dock Stairs, from at least 1682. The name change began in about 1823. The executions on the foreshore declined in number with the last in 1830. We think the area needed what we now call rebranding.

This section lists the memorials where the subject on this page is commemorated:
Execution Dock

Born London. Lawyer and positivist. Supporter of many social causes. He intro...