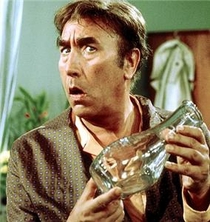 Comedian and actor. Born Francis Alick Howard in York. He started entertaining whilst serving in the army in World War II, during which time he changed the spelling of his surname, 'to be different'. After a successful period in radio and films, his career went into decline. It however underwent a revival during the 1960s, especially after appearing on BBC TV's 'That Was The Week That Was', where he satirised the satire boom. On stage he appeared in 'A Funny Thing Happened on the Way to the Forum' which led to one of his greatest successes in the television comedy 'Up Pompeii!'. Sadly, he took great pains to hide his homosexuality, even though most people assumed he was gay anyway.

This section lists the memorials where the subject on this page is commemorated:
Frankie Howerd