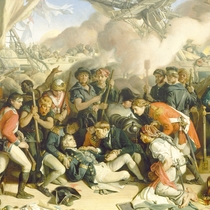 The popular image of the navy in Nelson's time, is of ships manned solely by 'British Tars'. In fact the crews of the ships that fought at Trafalgar included sailors from America, Ireland, Prussia, Sweden, the West Indies, Africa, and even France and Spain, (against whom the British were fighting). On Nelson's ship HMS Victory there were twenty-two non-British nationalities. In total over 18,000 sailors and marines fought on the British side. Our picture of the painting of the death of Nelson by Daniel Maclise, includes a black sailor, second from the left.

This section lists the memorials where the subject on this page is commemorated:
Foreign nationals at the Battle of Trafalgar

Churchill's chief military advisor in WW2.  Born (and brought up) in France a...