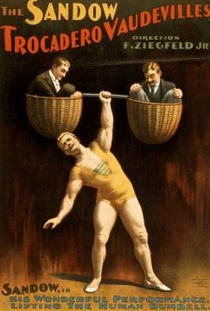 Body-builder and entertainer. Born Friedrich Wilhelm Müller in Königsberg, Prussia (now Kaliningrad, Russia). He left Prussia to avoid military service and travelled through Europe perfecting his physique. His stage surname came from his mother's maiden name. We don't know where 'Eugen' came from but it seems likely that it was connected to Sandow's promotion of the eugenics movement, certainly not a case of 'nominative determinism' (see Isambard Brunel for examples). In the USA he performed for the impresario Florenz Ziegfeld. In about 1895 he moved to Britain, and in 1911 was honoured by George V, who followed his teachings, appointing him ‘professor of scientific physical culture to the king’. Died at his home in Holland Park. This film from 1894 shows him flexing his muscles.

2019: The Natural History Museum tells of the statues made from a 1901 cast of Sandow's body: one briefly displayed in 1901 and the other made on commission from Arnold Schwarzenegger in the 1990s.

This section lists the memorials where the subject on this page is commemorated:
Eugen Sandow

Wrestling coach. Born Yosef (or Yossef) Gutfreund in Romania. He was part of ...