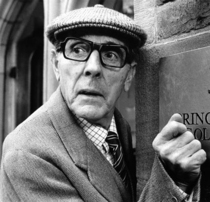 Scriptwriter and actor. Born in Oldham, Lancashire. As a writer, he worked with Spike Milligan on the early scripts for the Goon Shows. He wrote for many of the major comedians of the day, including Tony Hancock, Tommy Cooper and Peter Sellers. On television his series 'Sykes and a ....', in which he and Hattie Jaques starred, was one of the most popular programmes of the time. On stage he famously appeared with Jimmy Edwards in the farce 'Big Bad Mouse', in which no performance was ever the same, as the pair of actors only stuck to the basic script and ad-libbed the rest of it. Although suffering from deafness and eventual blindness, he still continued to work and made a cameo appearance in the film 'Harry Potter and the Goblet of Fire' in 2005. Died at his home in Esher, Surrey.

This section lists the memorials where the subject on this page is commemorated:
Eric Sykes