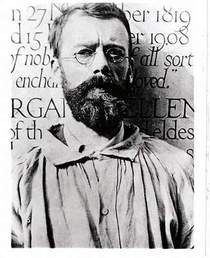 Sculptor. Born Brighton. One of thirteen children of a clergyman, he remained religious all his life. Passionate believer in the "carving direct" method. His sculptures would sometimes depict controversial passions and his own transgressive sexual passions extended to a long incestuous relationship with his sister. Had strong views on what people should wear. Women, being inferior should cover up. Wrote a book on the effect of trousers on men's bits 'Trousers & The Most Precious Ornament'.

Studied under Johnston and assisted with the creation of the Johnston sans typeface. Then designed his own, the Gill Sans typeface. A 'compare and contrast' is fascinating. In 1914 was invited to design the Great Seal for George V. The design was accepted but never produced because WW1 intervened. More interestingly, at the time no one seems to have spotted that the king's mount was shown in the urination position. A mistake (or piss-take?) repeated by Hardiman in his statue of the mounted Earl Haig in 1937. Gill died Harefield Hospital, Uxbridge.

Other works in London include: relief sculptures on 55 Broadway (3 of the 8 Winds); Prospero and Ariel and others on Broadcasting House; Stations of the cross in Westminster Cathedral; Moorfields; and Doves Bindery and Press plaque (possibly).

This section lists the memorials created by the subject on this page:
Eric Gill