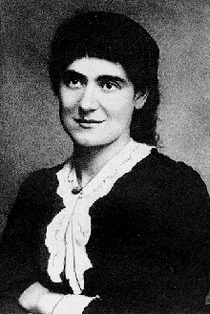 Socialist writer and activist. Karl Marx's daughter, born 28 Dean Street and nicknamed Tussy. Her father's secretary from an early age, she returned home to nurse her aged parents. Created the first English translation of Madame Bovary. Worked with Hyndeman and the Social Democratic Federation through which she met Edward Aveling and together they were founding members of the Socialist League of which William Morris was a member. She supported a number of strikes including the matchgirls', and promoted socialism internationally. From 1884 she lived openly with Aveling but they never married. He doesn't sound like a very nice man: he was married to another woman for most of their time together and 5 years after his wife died he married someone else, not Eleanor. Less than a year later Eleanor committed suicide at home in Sydenham, Kent. This was not her first attempt but, since Aveling's initials were on the prescription for the prussic acid that was used, murder has been suggested. Her ashes are with her father's remains in Highgate Cemetery.

This section lists the memorials where the subject on this page is commemorated:
Eleanor Marx-Aveling

Chairman of the Smithfield Markets Committee, 1888.

Company Secretary to the Dairy Supply Company in 1888.