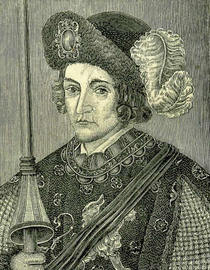 Edward, Duke of Cornwall and Prince of Wales and Aquitaine. Eldest son of King Edward III, born at the Palace of Woodstock, Oxfordshire. In his lifetime he was known as Edward of Woodstock; the soubriquet 'Black Prince' developed after his death and was probably derived from the colour of his armour. Popular in his time and renowned as a military leader, winning victories over the French at the battles of Crécy and Poitiers. In 1348 he was created the first Knight of the Garter. Effectively served as regent when his father was away on campaigns but never ruled as king since he died just before his father. So the next king was his ten year old son Richard II.

2019: The Eastern Daily Press had an article about the Anglia knight, "seen twirling around at the start and end of the day's television between 1959 and 1988". Anglia Television's figurehead was a 22kg sterling silver statue based on that of Richard I in Westminster. Dispite this the statue was intended to represent Edward the Black Prince and was a trophy commissioned by the king of the Netherlands for his hunting society, the Falcon Club. Won by an Englishman it was brought to the UK and in 1959 put in the shop window of Asprey and Co where it was purchased by Anglia Television chairman Lord Townshend. The Anglia logo was added to the flag and it became the television channel's figurehead. It is now on display at the ITV Anglia office reception in Norwich. The EDP have the "twirling" video and some close-ups show what a lovely object this is.

The TV Room adds that the statue was made in 1850 by a firm of London Silversmiths (Asprey's, possibly). William III reigned in the Netherlands 1849-90. Knight was retired in 1988 due to Anglia modernising its image.

This section lists the memorials where the subject on this page is commemorated:
Edward the Black Prince

Born at Greenwich Palace. Daughter of King Henry VIII and Catherine of Aragon...