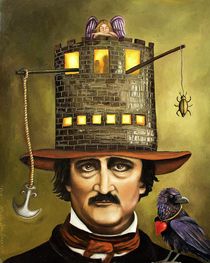 Author and poet. Born Edgar Poe in Boston, Massachusetts, he added Allan to his name in honour of the family who took him in after his father absconded and his mother died. Lived in London from 1815 to 1820, where he was educated at the Manor House School in Stoke Newington. Returning to the USA, he had a brief military career before concentrating on writing. Some of his best known works are 'The Fall of the House of Usher', 'Murders in the Rue Morgue' and the poem 'The Raven'. His death, aged only 40, was as mysterious as some of his works. He was found on the streets of Baltimore in a 'dire' condition, wearing clothes which were not his own and calling out the name 'Reynolds'. He was taken to the Washington Medical College where he died shortly afterwards.

The Baltimore Post-Examiner gives some details of Poe's time in Britain. In Your Area has an etching of a house captioned 'House in Stoke Newington where Edgar Allan Poe Lived' but we can't see how it could be the site where the plaques now are.

This section lists the memorials where the subject on this page is commemorated:
Edgar Allan Poe

Here is a  video of the unveiling.

Poe Unveiled by Steven Berkoff on 4 June 2011. The Flicker Club The Edgar All...