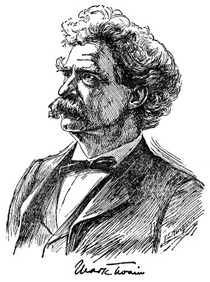 American writer. Born as Samuel Langhorne Clemens in Florida, a small village in Missouri; it was small then and is now non-existent.  Wrote Adventures of Huckleberry Finn, Adventures of Tom Sawyer. Also known for his quotes, for example: "I don't give a damn for a man that can only spell a word one way." and "I have a higher and grander standard of principle than George Washington. He could not lie; I can, but I won't." He claimed that his pen name comes from the Mississippi boatman's cry meaning two fathoms, a safe depth for a boat. In London in 1900 he was in the inaugural train on the Central Line and opened the Kensal Rise library. Died Connecticut.

This section lists the memorials where the subject on this page is commemorated:
Mark Twain