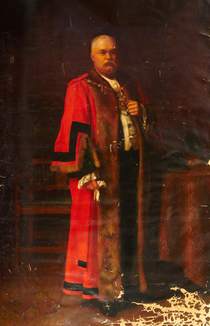 Our colleague, Andrew Behan, has reseached Miller and found this photo:
Frederick Montague Miller was born in 1848 in Hackney, the son of Claudius Montague Miller and Elizabeth Miller, nee Williams. His father was a physician. He was baptised jointly with his sister Adeline Emily Miller on 24 August 1848 at St Paul's Church, Canonbury, Islington and the family were living at Claremont Cottage, Stoke Newington Road, Hackney. The 1861 census shows the family at Claremont Villa, Stoke Newington Road, but by 1871 they had moved to 86 Stoke Newington Road, Hackney and his occupation on the census was a physician, the same as his father. On 11 June 1873 he married Mary Elizabeth Kirby, the daughter of a bank manager, at Christ Church, Highbury and the 1881 census shows them both living with their two daughters at 284 Amhurst Road, Hackney. They were all still at this address by the time of the 1891 census, but the 1901 census shows that they had moved to 208 Upper Clapton Road, Hackney.

This section lists the memorials created by the subject on this page:
Dr. Frederick Montague Miller

This stone was laid by HRH Princess Christian on Saturday the 23rd March 1907...

Guy's men who died in the South African War

Alder President associated with St Bartholomew's Hospital in 1702. A director...