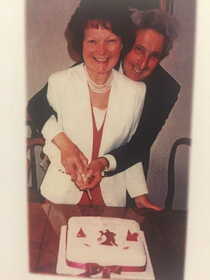 Andrew Behan has kindly provided the following research: Douglas Alfred Barber was born on 31 March 1928 in Romford, Essex, the youngest of the three children of Charles Douglas Barber (1884-1958) and Dorothea Ida Barber née Garbe (1885-1966). His father was an analytical chemist. The 1939 England and Wales Register shows the family living at 58 Mount Crescent, Brentwood, Essex and he was registered as a schoolboy.

In 1956 he married Gloria Evelyn Elsy Godwin (1932-2018) in Ilford, Essex. When his father died in 1958 he was appointed as an executor of the estate and his occupation was given as a chartered surveyor and his occupation remained the same when acting as an executor for his mother's estate in 1966. He died, aged 72 years, on 30 June 2000 in the London Borough of Havering.

This section lists the memorials where the subject on this page is commemorated:
Douglas Alfred Barber

Secretary of State for the Colonies 1855.  Born Upper Brook Street.