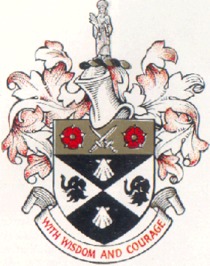 St Pancras was a civil parish and metropolitan borough in London. It was an ancient parish in the county of Middlesex, governed by an administrative vestry. The parish was included in the area of responsibility of the Metropolitan Board of Works in 1855 and became part of the County of London in 1889. The parish of St Pancras became a metropolitan borough in 1900, following the London Government Act 1899, with the parish vestry replaced by a borough council. In 1936 the corporation received an official grant of arms from the College of Arms. The figure of St Pancras is the crest, on top of the helm. The shield featured elements from the arms of historical landowners of the borough. The scallop shells were taken from the arms of the Russell family, Dukes of Bedford. The elephant heads were from the arms of the Marquess Camden. The roses and crossed swords represented the Dean and Chapter of St Paul's Cathedral. These arms can still be seen over the entrance of Camden Town Hall. In 1965 the borough was abolished and became part of the London Borough of Camden. Charges from these 1936 arms were used, together with charges from the coats of arms of Hampstead and of Holborn, when the new armorial bearings for the London Borough of Camden were designed in 1965.

This section lists the memorials created by the subject on this page:
Metropolitan Borough of St Pancras

St Pancras Borough Council This stone was laid on Thursday the 14th. June 19...

Son of Sir Ambrose Heal of the Heals furniture shop which was established in ...