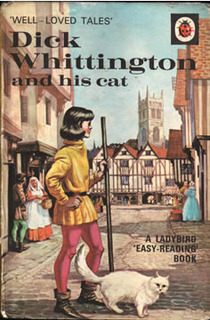 Born in Pauntley, Gloucestershire, second son of a wealthy man. Thrice Lord Mayor of London: 1397, 1406 and 1420 (actually four times but two were consecutive). Three times Master of the Mercers' Company.  The Museum of London tells his story well but we first learnt the story from the Ladybird book (see the picture) and many British children learn it from Christmas pantomimes.