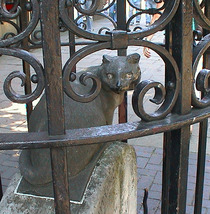 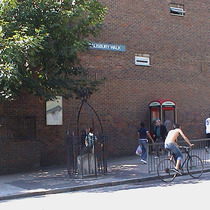 This stone was restored by W. Hillier 1935

{Carved into the stone facing the pavement - too weatherworn to be legible.}

{On a brass plaque screwed to the base to the north:}
1964 Whittington's Cat presented by Mr & Mrs Paul Crosfield, Donald Bisset and Friends.

British History Online (1878) says that in about 1795 "the original stone, being broken in two pieces, was removed hence to the corner of Queen's Head Lane, in Lower Street {Islington}, and placed against the posts to serve as curbstones." That page has a drawing of the 3-part stone which was erected as a replacement, and then removed in 1821 to be replaced with the present stone. The inscription used to have (after "1393") "This stone was restored, The railing fixed, and lamp erected, A.D. 1869."

Pinterest have a photo of the stone with the Victorian Whittington Hospital in the background, on the other side of the road. It was restored in 1935 and this photo shows a workman engaged with the stone so we think this must be 1935. The cat was added in 1964, at about the same time that Archway Road was widened.

When we first researched this memorial, years ago, we could not find the name of the sculptor of the cat, but now, 2013, Sue Sinton Smith contacts us via Facebook to say there were two: Anthony Southwell and Jonathan Kenworthy. And we see the listing entry confirms that. Thanks Sue, we are delighted to add this information at last.

2014: We have been informed by Will Kenworthy that the cat was carved, in Irish limestone (Kellymount), by Jonathan Kenworthy, who was a third year student at the Royal Academy Schools at the time. He says that “Anthony Southwell did not get the commission so it is incorrect to say that two sculptors are responsible for this carving”.

This stone is, supposedly on the very spot where Dick heard the Bow bells ring out: "Turn again, Dick Whittington, thrice Lord Mayor of London". We hate to mention that Dick never was a poor tramp, that he must have had a very poor sense of direction to be returning from the City of London to his home in Gloucestershire by way of Highgate Hill and also that, even with the wind in the right direction, it was probably not possible to hear Bow bells (that's St Mary le Bow in Cheapside) in Highgate.

There used to be a statue of Dick Whittington (who really was a Lord Mayor) very near here. Whittington built a “college” (almshouse and hospital) next door to St Michael Paternoster Royal in the City. From British History Online: In 1822 this was demolished and a new college was built in Highgate. Initially it was to have been built close to the stone but "the ground not being procurable", the college was placed at the foot of Archway Road.

A stone statue of him as a boy was erected on the front lawn of the almshouses. These were demolished in 1966 to make way for the widening of Archway Road. The later, Victorian, Whittington Hospital remains, though much changed. We remember the almshouses (in unfashionable Gothic) with affection but cannot remember the statue. The almshouses were built a third time in Felbridge near East Grinstead where they still provide charitable homes, run by The Mercers/Charity of Sir Richard Whittington, and provide a home to a statue from Archway.

2021: We've just learnt about the London Mayors' Association Whittington Walk. This began in 1980 and, we believe has taken place every year since.  It's a 5 mile sponsored walk in Whittington's legendary footsteps, from Whittington Hospital to Mansion House. March seems to be the month it generally takes place. The participants are the Mayors from the London Boroughs and the Lord Mayor and Lady Mayoress (yes this is still what the Lord Mayor's wife is called). Touching the cat as they pass seems to have become part of the ritual.  that website has a lovely photo of about 17 mayors at the start of the walk, all in their robes and chains - not ideal walking garb.

This section lists the subjects commemorated on the memorial on this page:
Dick Whittington and his cat - Highgate

This section lists the subjects who helped to create/erect the memorial on this page:
Dick Whittington and his cat - Highgate

Our picture shows Paul Crosfield as a young boy at the Highgate tennis fete i...