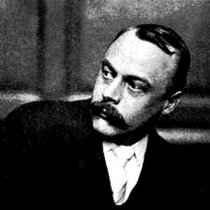 Author. Born Edinbugh. Aged 5 lost his mother and was brought up in England by his grandparents. Very successful at school in Oxford, he was denied university for financial reasons, which explains his career choice. Worked in the Bank of England for nearly 30 years and resigned suddenly shortly before "The Wind in the Willows" was published in 1908, following an argument with one of the directors, Cunliffe.

His duties at the bank seem to have involved dealing with armed terrorists. In 1903 a lunatic ran into the bank demanding to see the governor. Grahame went to see him and was fired at three times but he ducked each time, or the gunman was a rotten shot. There is a plaque to Grahame in the Bank's internal Fountain Court.

Sadly, Alastair, the son and only child, for whom TWITW was originally written, was not healthy and had an unhappy life which he eventually ended as an undergraduate in Oxford, on a railway track.

This section lists the memorials where the subject on this page is commemorated:
Kenneth Grahame