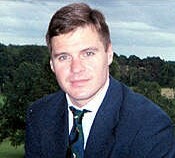 Derek Ogilvie Sword was born on 30 November 1971 in Dundee, Scotland

As a teenager, he played tennis for Scotland's team, but as an adult it was squash that led him to his fiancée, Maureen Sullivan. They met at a dinner of the New York Athletic Club, where he played squash three times a week, and they planned to marry in 2002.

He moved to New York City from Scotland in 1995 to work as an equities sales analyst for Keefe Bruyette & Woods, a securities firm. The job took him back to Britain every six weeks allowing him to see his family often, but he loved New York and did not want to live anywhere else.

This section lists the memorials where the subject on this page is commemorated:
Derek Ogilvie Sword