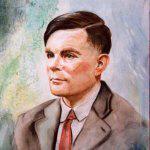 Mathematician, computer scientist and war-shortener. Born Alan Mathison Turing at Warrington Lodge, Warrington Avenue. He formalized the concepts of 'algorithm' and 'computation' and effectively invented the programmable computer. During WW2, he was an important participant at the Bletchley Park decryption establishment, where the Enigma codes were broken. It is estimated that this shortened the war by between 2 and 4 years.

After the war he was employed at the National Physical Laboratory at Teddington, in a project to build the first multi-purpose computer, ACE, the Automatic Computing Engine. For the memory (mercury delay lines) they worked with the Postal Service Research Centre at Dollis Hill. Due to internal politics and personal differences the ACE, though built, was not the first computer. Manchester University got there first, but still using Turing's theory.

Turing was a long distance runner; he had been on the short-list for the marathon in the 1948 Olympics. There are stories that while working at Teddington and travelling to Dollis Hill, his colleagues went by public transport while he ran and there was only about 10 minutes in it. Google Maps gives this as about 12 miles, 4 hours to walk and almost 1.5 hours by train, bus, etc. This is back in the days before "jogging" was a common activity.

He was brought to trial in 1952, for his sexual relationship with another man (which was then still illegal). As an alternative to prison, he underwent a series of oestrogen injections. Committed suicide at Hollymeade, Adlington Road, Wilmslow.

There is a growing movement to recognise Turing for the national hero that he is.

Another, appropriately computerised, memorial was installed in 2016. It's created by UVA and is located in Paddington, under Bishop's Bridge Road at the point where it crosses the canal.

This section lists the memorials where the subject on this page is commemorated:
Alan Turing