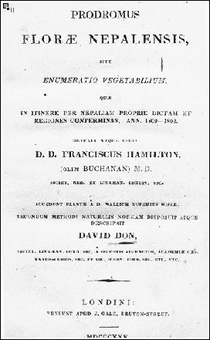 David Don was born on 21 December 1799 at Doo Hillock, Forfar, Angus, Scotland, a son of George Don (1764-1814) and Caroline Clementina Don née Stuart. His father was a curator at the Royal Botanic Garden, Leith Walk, Edinburgh. He was baptised in Forfar on 26 December 1799.

He came to London in 1819 and initially worked as a librarian for the botanist Aylmer Bourke Lambert. In 1821 he visited Paris, France, where he met many prominent scientists of the age before becoming the librarian of the Linnean Society of London in 1822. He was made an associate of the society the following year and was a Professor of Botany at King's College, London from 1836.

Whilst the librarian to the botanist Aylmer Bourke Lambert he compiled for him, Prodromus florae nepalensis ... London, J. Gale, 1825, based on collections made by the botanists Francis Hamilton and Nathaniel Wallich of the Culcutta Botanic Garden. As we could find no image of David Don we have shown an image of this publication.

This section lists the memorials where the subject on this page is commemorated:
David Don