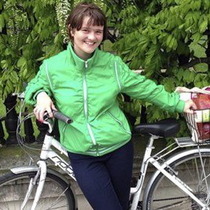 From London24: "Ms Minakhmetova, a former City financial analyst from Bethnal Green, set up her own business in June 2013 called Simple2Connect, a location-based professional networking application for mobile phones. The 24-year-old from Siberia, described herself as an “addict networker” and was a regular face at various events at Shoreditch’s Tech City. She graduated from the Moscow State Institute of International Relations before completing an MSc in finance at Cass Business School in 2011."

At 8.45am on a Wednesday morning Venera was dragged under the wheels of a lorry on the cyclist death-trap, otherwise known as Cycle Superhighway, CS2, at the Bow Roundabout. This seems to have happened at exactly the same spot where SvitlanaTereschenko was killed in the same awful way almost exactly 2 years previous.

This section lists the memorials where the subject on this page is commemorated:
Venera Minakhmetova

Akis Kollaros was killed by a tipper truck at about 4pm on a Monday.  From Ro...