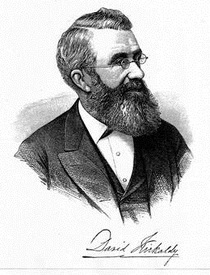 Born near Dundee. In 1857 Kirkaldy helped form the Institution of Engineers in Scotland and was the first person to set up a load testing machine for construction materials powerful enough to deal with the largest specimens. (But see Brown Lenox & Co.)

Kirkaldy opened his first London works in an existing building in The Grove, Southwark on 1 January 1866, installing a testing machine he'd had built in Leeds. The machine was used for the construction of the nearby 1869 Blackfriars Bridge. In 1874 he had the Kirkaldy Testing Works purpose built.

This section lists the memorials where the subject on this page is commemorated:
David Kirkaldy

Kirkaldy Testing Works This building was built in 1874 for David Kirkaldy (18...

Politician and scientist. Born in London. A brief browse on the web brough...