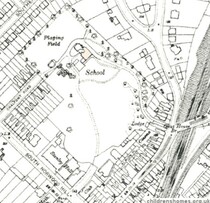 The house, Cumberlow, was at what is now the north end of Chalfont Road. It is shown on this 1895 map and the grounds seem to extend onto the neighbouring sheet, which covers the site of the Stanley Halls and Trade School. So it seems that Stanley gave (part of) his estate for those developments.

Children's Homes gives: "Cumberlow (or Cumberlow Lodge as it later became known) was built in around 1878 as a residence for ... William Ford Robinson Stanley, who himself designed the building. The property occupied a six-acre site, formerly a brick field, in South Norwood. The property's original address was 1 Lancaster Road but later changed to Chalfont Road, which became the access route into the site.

Anna Racoon (b.1948) recounts her memories of living at Cumberlow Lodge when it was Lewisham Children's Home: "It was huge, my memory fails me but I would say probably 50 to 60 girls were there at any one time." She also gives a photo of the building but it is quite close up and not very informative.

Workhouses gives: "The Lewisham Union had a children's Receiving Home at 28 Sangley Road, Catford. By the late 1920s, it had relocated to 'Cumberlow', Lancaster Road, South Norwood. The homes dealt with children newly entering the union's care. The Sangley Road premises still exist but the Lancaster Road building has gone."

We thank the Children's Homes and Workhouses sites which have done some splendid work. This map comes from the Children's Homes page for Cumberlow and shows the site in 1933. There we learn that the demolition took place just days after English Heritage had announced that they were considering listing the building.  Surely somewhere there must be photographs.

This section lists the memorials where the subject on this page is commemorated:
Cumberlow

Erected by the inhabitants of South Norwood to commemorate the golden wedding...

The basin was built, as "Regent’s Canal Dock", by the Regent's Canal Company ...