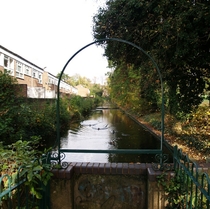 It ran from a junction with the Grand Surrey Canal near New Cross Gate to a basin on a site now occupied by West Croydon station. With 28 locks grouped into two flights, and numerous swing bridges, it linked the Thames to Croydon via Forest Hill, Sydenham, and Anerley.

It was a financial failure; the £100 shares falling in value to just two shillings in 1830. The proprietors, realising that the coming of the railways was an opportunity not to be missed, sold the canal for use as the course of a rail track. Our picture shows one of the few remaining parts of the canal in Betts Park, Anerley.

The Cut traces the route of the Canal through modern-day photos.

This section lists the memorials where the subject on this page is commemorated:
Croydon Canal

{Panel 1:} A Brief Local History In medieval times this area was known as The...

From London Gardens Trust: "The bridge over the Regent's Canal to the north w...