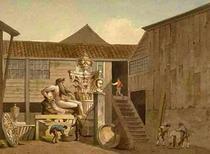 A ceramic material called an artificial stone, and created by Mrs Eleanor Coade. It became popular in the mid-nineteenth century when there was a high demand for decorative features on buildings. Its unique features were that it could be moulded into complex shapes and survived British weather very well. The secret of its composition was lost for a period but in modern times was reverse-engineered and is now successfully made again. The secret was the inclusion of ground glass. Other London examples: the figures above the entrance to the Twinings tea shop in the Strand, the caryatides on St. Pancras Church in Euston Road, the (lazy) caryatides on Pitzhanger House in Ealing. London My London has more information and photos of Coade items.

The Coade factory was on the South Bank, about where Hungerford Bridge lands.

In 1799 Coade appointed her cousin John Sealy (her mother’s sister Mary’s son), already working as a modeller, as a partner in her business, which then traded as 'Coade and Sealy' until his death in 1813 when it reverted to just 'Coade'.

When Coade died in 1821 she made bequests to various married women, stipulating that their husbands were not to touch the funds.

This section lists the memorials where the subject on this page is commemorated:
Coade Stone

This section lists the memorials created by the subject on this page:
Coade Stone

Architect. Born Manchester (or Lancaster depending on source) as Lewis Henry ...