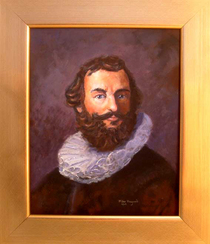 Sailor. Born Harwich, Essex (His birth year is approximate). He moved to Rotherhithe in London and became master of the Mayflower from at least 1609. The ship was usually employed in transporting goods such as wines, spices and furs but in 1620 took the pilgrims to America. The Jones river in Massachusetts is named for him. He was buried in Rotherhithe on 5th March 1622. The likeness of him is a modern representation.

2020: Via Facebook we've been asked whether this image doesn't actually represent Myles Standish, military adviser for the Plymouth Colony. Searching around we find utter confusion about the images of the two men. There are perhaps 3 source images which could all be of the same man (same facial hair, same head hair) or possibly 3 different men, and they seem to be randomly identified as Jones or Standish. We can find no identification at a fully credible source.

This section lists the memorials where the subject on this page is commemorated:
Christopher Jones

First things first - pronounce his name to rhyme to with turkeys.  He has a c...