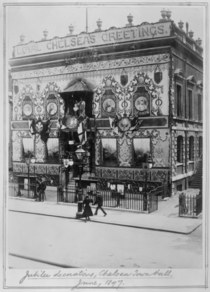 The original building (see image) was designed in 1886 by J. M. Brydon and the existing south elevations are his. The current north elevations are part of the 1906-08 extension by J. R. Stokes. The Library Time Machine has an excellent post about the evolution of this building with this splendid photo of it submerged under the decorations for Queen Victoria's Diamond Jubilee.

Built as a town hall but when Chelsea and Kensington amalgamated in 1965 those functions moved, initially to the Kensington Town Hall. This proved too small so a new K&C TH, designed by Sir Basil Spence was opened in 1977.

The old Chelsea TH still houses a library but is mainly rented out for functions. The old Kensington TH was not so lucky. It used to be on Kensington High Street, immediately east of Kensington Church Walk, but was demolished in 1982 and replaced with a modern building. The splendid Library Time Machine have photos of it before and during demolition.

This section lists the memorials where the subject on this page is commemorated:
Chelsea Old Town Hall

Builder and local politician. Born Stratford to a father with the same name a...

Ministry of Public Building and Works

Formed during WWII to organise the requisitioning of property for wartime use...