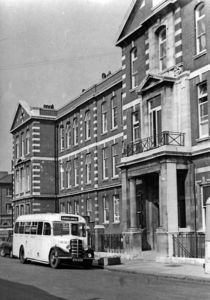 Set up in a house at 178 King's Road, this hospital, like many at the time, quickly found its premises too small. It moved into the first hospital to be built dedicated to gynaecological diseases, in Fulham Road (the one with the plaque). This opened in 1883 but again became too small and the hospital moved to another purpose-built site in 1916, in what is now Dovehouse Street. This closed in 1988 and (in 2014) the site is now used by the Royal Brompton Hospital, but "Chelsea Hospital for Women" is still carved in the porch lintel.

This section lists the memorials where the subject on this page is commemorated:
Chelsea Hospital for Women

Hospital of the Holy Trinity

Erected by Archbishop John Whitgift, after he had petitioned and received per...

Reformer and founder of "The Lancet" - begun in Oct 1823. Spoke in Parliament...