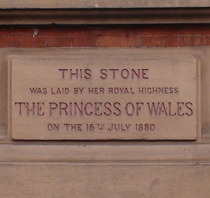 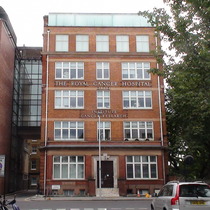 This stone was laid by Her Royal Highness, the Princess of Wales on the 16th July 1880.

Princess Alexandra was laying the foundation stone for the Chelsea Hospital for Women which was here until about 1916.

The plaque is at the left between the ground and basement windows.

In 1916, when the Chelsea Hospital for Women moved out, this building was acquired to house the new Freemasons' Hospital and Nursing Home. However instead of that it immediately became the Freemasons' War Hospital. Only at the end of the war did the Freemasons' Hospital and Nursing Home open here. By 1933 more space was needed and the hospital moved to new premises in Ravenscout Park, and soon after was renamed as the Royal Masonic Hospital.

In 1937-9 Chester Beatty bought the building, equipped it and presented it to the Royal Cancer Hospital (later the Royal Marsden Hospital) as a research institute. During this work the Renaissance-style facades were removed, giving it a rather ageless look, and the lettering was added. It became the Chester Beatty Institute, later renamed the Institute of Cancer Research. We thank Keith Bradnam for prompting us to fill in this period of the building's history, gleaned from the splendid Lost Hospitals of London.

This section lists the subjects commemorated on the memorial on this page:
Chelsea Hospital for Women

This section lists the subjects who helped to create/erect the memorial on this page:
Chelsea Hospital for Women

The Duke of Sussex had died just 3 years before this plaque was erected. We ...