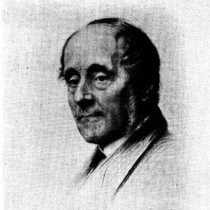 Co-executor, with Edwin Bedford, to Mary Gray Ratray who died in 1873. Lived and/or worked at 12 Cavendish Place.

In the Madras Catholic Directory and General Annual Register for the Year of our Lord 1870 we find a Charles Jellicoe as an actuary and Secretary of the Protector Life Association and have made the assumption that he's our man. JSTOR provides access to part of an obiturary and Actuaries.org a pdf with more information. He was clearly a very important figure in the Institute of Actuaries and in the creation of its journal.

Andrew Behan has kindly carried out some research on this man: His early life is difficult to trace but the ages shown for him on three census returns and his age given at the registration of his death would indicate he was born about 1804. Three subscribers to ancestry.co.uk have created family trees which include him as a distant relative and states that his parents were Adam James Jellicoe and Anna Jellicoe née Nash, but I can't find any evidence to confirm this assertion. The first record I can find for him is the 1851 census which shows him living with his brother James Jellicoe at 5 Wimpole Street, Marylebone, with a housekeeper plus one male and two female servants. His occupation was an Actuary to an Assurance Company. The 1871 census shows the two brothers living at 41 Cavendish Place, Marylebone, with a housekeeper, a cook, two housemaids and a footman. His occupation was given as a retired actuary and his brother as a retired solicitor. The 1881 census shows him living at 35 Brunswick Terrace, Hove, Sussex, with a housekeeper, a cook and housemaid. He died, aged 78 years, at 35 Brunswick Terrace on 13 November 1882 and left personal estate valued at £72,405-9s-3d.

This section lists the memorials created by the subject on this page:
Charles Jellicoe

Gold refiners and assayers who occupied 53 and 54 Barbican. One of the few b...