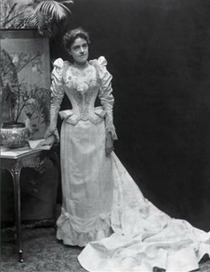 Regarding the Runnymede lands, About Britain says: "Runnymede was the site for the Egham Races which were held here in the 18th century and 19th century until they were transferred to Kempton Park. The land had also been under threat of building work until it came under the permanent protection of the National Trust."

Cara's husband bought the Runnymede meadows to safeguard their future. Shortly after his death in 1929, Cara and her two sons gave 188 acres of the meadows to the National Trust in his memory. She commissioned Lutyens to create the memorials.

The 107 acres to the south-west of Runneymede meadows, Cooper's Hill Woods, was given to the National Trust on 7 July 1963 by the former Egham Urban District Council. On this land are located 3 memorials with American associations: the Magna Carta monument, the J. F. Kennedy memorial and the Jamestown tree. This American flavour surely cannot be a coincidence so we wonder if the Broughtons were the original source of this land also, but we cannot trace it back before the Council gift.

This section lists the memorials where the subject on this page is commemorated:
Cara Leland Rogers Duff Broughton, Lady Fairhaven

Born Gloucester. Met the Wesley brothers and was a founder of Methodism. Prea...