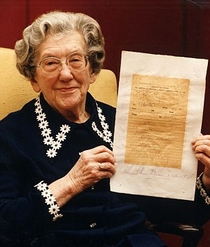 Aged 8, survivor of the sinking of the RMS Titanic. Born in Ilford, she and her parents were booked to emigrate to America on the Philadelphia, but because of a coal strike, they, and many other passengers were transferred to the Titanic. Her mother became uneasy, saying that: 'to call a ship unsinkable was flying in the face of God'. Mother and daughter survived the sinking, but Mr Hart perished.

She was active in Titanic-related events for most of her remaining life. She maintained that the ship had broken in half (a fact which had been disputed until the wreck was discovered in 1985). She also said that a ship, (possibly the Californian) was visible about nine miles away from the collision and not nineteen as was claimed at the time. When the wreck was discovered, she was adamant that it should be treated as a gravesite, and deplored the salvage of artefacts. In 1994, she wrote her autobiography 'Shadow of the Titanic - A Survivor's Story'.

In our photograph, she is holding an unposted letter written by her mother on board the ship.

This section lists the memorials where the subject on this page is commemorated:
Eva Hart