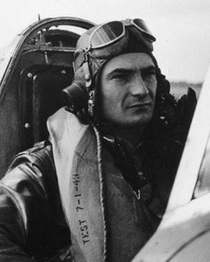 In 1940 he joined the Royal Canadian Air Force. He was a pilot holding the rank of Flight Sergeant and came to England in 1941 where he was assigned to No.133 Squadron at RAF Biggin Hill, Kent being promoted to the rank of Pilot Officer. When in August 1942 the squadron was disbanded and became the 336th Fighter Squadron in the United States Army Air Corps he transferred to the new squadron. On 11 March 1943 was promoted to 1st Lieutenant and in March 1944 he became an Engineering Officer, assigned to Headquarters, VIII Fighter Command.

He remained in the USAF after the war, serving at bases in Arizona, Texas and New Mexico, as well as one tour in England as a maintenance officer. In November 1963 he retired from the USAF as a Lieutenant Colonel. He became an engineer for Custom Pools Company in Albuquerque, New Mexico, retiring in 1980, having married Billie Brunette Phillips (1917-1995). They had one daughter. He was awarded the Distinguished Flying Cross, the Air Medal with 3 Oak Leaf Clusters, the Purple Heart, the European-African-Middle Eastern Campaign Medal and the World War II Victory Medal.

This section lists the memorials where the subject on this page is commemorated:
Joe Bennett