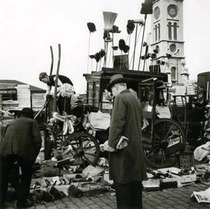 Caledonian Cattle Market, built in 1855 by J. B. Bunning, and demolished after WW2.

Caledonian Market was held in the area now partly occupied by Caledonian Park, the large area bounded by what are now (clockwise): Hungerford Road, Hartham Road, Caledonian Road, Brewery Road, York Way.  Built to replace the over-crowded Smithfield live-stock market, it gradually changed in the early 20th century and ended its days as a flea-market.

2021: The Islington Gazette reported (with photo) that one of the cast iron bull's heads that used to be part of the gate posts for the market was up for auction. The only other known surviving head is held by the Museum of London.

This section lists the memorials where the subject on this page is commemorated:
Caledonian Market

In the fifteenth century this was the Horn tavern. In the early seventeenth c...

Salter was auditor to the Vestry of St Pancras and gave College Gardens to th...