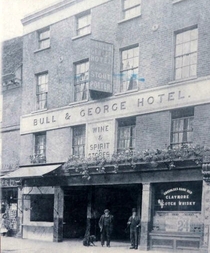 Probably built sometime in the 18th century. It served as a coaching inn on the London-Dover road. Jane Austen stayed here several times whilst travelling to visit her brother in Canterbury. Quoting from David Nokes' book on her life, "... they travelled on by stages, first to Rochester and then to the Bull and George Inn at Dartford, where they all sat down a little after five, to a dinner of beef-steak and boiled fowl, but, as Jane noted, 'no oyster sauce'". The hotel closed in 1972 and was eventually demolished. A branch of Boots the Chemist now stands on the site.

This section lists the memorials where the subject on this page is commemorated:
Bull and George Hotel

Businessman. Born in Oak Park, near Chicago. He joined McDonald's in 1954 and...

A water conduit, and point of measurement. From Wikipedia: "first mechanicall...