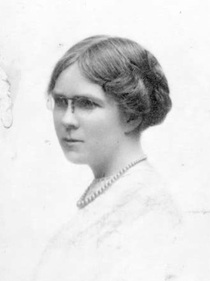 Author and journalist. Born Abingdon and brought up in Putney. Her father was bankrupt and her mother had committed suicide by the time Dorothy was 22. Moved to Bloomsbury in 1896 and while working as a dental secretary in Harley Street started her literary career. Most of her novels were part of the 13-volume semi-autobiographical series Pilgrimage. The first in this series, Pointed Roofs, was the first novel to be described as 'stream of conciousness'. For this reason her name is often linked with James Joyce, Marcel Proust and Virginia Woolf. Richardson called for equal rights for women and wrote from a feminist perspective.

Married an artist in 1917 and from then until 1939 they spent the summer in London and the winter in Cornwall. This out of season existence was probably dictated by their lack of funds, her writings being the main source of income. While in London she enjoyed exploring the streets and has been called an early flaneuse - see London Fiction.

This section lists the memorials where the subject on this page is commemorated:
Dorothy Richardson

The idea of this plaque may have originated in the 2015 journal article "Doro...