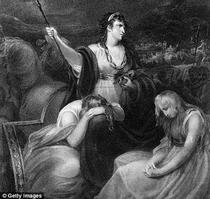 Queen of the Iceni. When the Romans arrived in AD 43 her husband, Prasutagus, was ruling the Iceni, the people in East Anglia. The Romans allowed him to continue his rule but when he died their approach changed and they took possession of the lands, flogged his wife, Boudicca, and raped her daughters. While the Roman governor was away fighting the Welsh, Boudicca, joined by other tribes, rose up, defeated the 9th Roman Legion and burnt three major Roman town: Colchester (which was the Roman capital), London and St Albans. But the Roman governor returned and Boudicca was defeated. Her end is uncertain. She either died of illness or killed herself to avoid captured. That's the story but apparently there is very little trustworthy evidence. What is known for certain, due to archaeological work, is that the three towns were all levelled by fire at the appropriate time.

This section lists the memorials where the subject on this page is commemorated:
Boudicca / Boadicea / Boudica

A London Inheritance has a 1947, or thereabouts, photo of "London's earliest ...