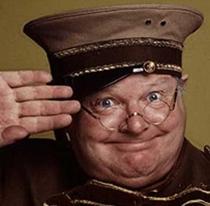 Comedian and actor. Born Alfred Hawthorne Hill in Southampton. In his teens he worked as a milkman, an experience which he later put to good use in his hit song 'Ernie - The Fastest Milkman in the West'. He adopted his stage first name from the comedian Jack Benny. He shot to fame in various television series from the 1950s to the 1980s. Eventually political correctness caught up with him and his contract was cancelled in 1988 amidst accusations of sexism. He died in Twickenham Road, Teddington, but his body was not discovered until he had been dead for a few days. On the day of his death, a new television contract had been delivered to him.

This section lists the memorials where the subject on this page is commemorated:
Benny Hill