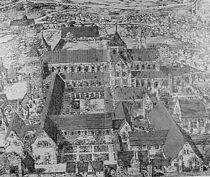 Former royal monastery. Founded by St Erkenwald, whose sister, Aethelburg, was the first abbess. Destroyed by the Danes it was rebuilt in the 10th century. William the Conqueror stayed here after his coronation in 1066. It followed the Rule of St Benedict and had a large endowment and sizeable income. Suffered severely after 1377, when the River Thames flooded around 720 acres of its land, which was unable to be reclaimed. It was dissolved in 1539 in the Dissolution of the Monasteries and demolished within three years. During its existence, the abbey had many notable abbesses including several saints, former queens and the daughters of kings. The abbess of Barking held precedence over all other abbesses in England.

This section lists the memorials where the subject on this page is commemorated:
Barking Abbey

Builders. An unusual name, so we are assuming that this is the company founde...