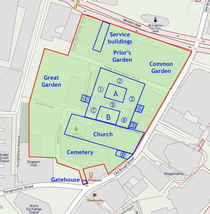 Augustinian friary just north-east of Bank, probably founded 1260ish, covering about 5.5 acres, it included a church, various other buildings for the accommodation of the friars and visitors, vegetable gardens, etc. Erasmus stayed here in 1513.

Thomas Cromwell developed a very grand house within the friary precincts which, on his downfall in 1540, was acquired by the crown and, 3 years later, sold to the Drapers Company for their Hall.

The friary suffered dissolution in 1538, on Cromwell's orders. The monastic buildings were replaced with a town house which survived until 1844, when it was turned into warehouses. In 1550 the nave of the church began to be used by foreigners, specifically the Dutch, and became the first official nonconformist chapel in England. The rest of the church was used for storage. Much was demolished in 1600 and then in 1862 a fire destroyed the rest. Reconstructed, it was destroyed in WW2 and rebuilt in the 50s.

The order was named for Saint Augustine of Hippo and so not connected to Augustine of Canterbury. From Augustinians in Britain : The Augustinian friars in Britain ceased to exist at the Reformation in the 16th century. After several attempts to re-introduce the Order, a mission, St Monica's, was established in the East End of London, at Hoxton Square, in 1864. From there the Augustinians re-established their presence throughout Britain.

This section lists the memorials where the subject on this page is commemorated:
Austin Friars

The board is not visually very interesting so we photo'd the church window in...

Housing reformer and co-founder of The National Trust.  Born at Wisbech, Camb...

Building contractors based in Hendon in 1926.

In 1754 the Fruiterers had warehouses at the “Three Cranes”, situated in a la...