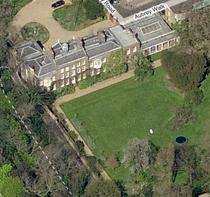 Built in 1698 by a group of doctors and apothecaries as a spa. It was originally called 'The Villa', became Notting Hill House in 1795 and was renamed as Aubrey House in the 1850s. It is now a grade II listed building. The name is derived from Aubrey de Vere, who was the Norman feudal lord of the area. After Buckingham Palace, it has the second largest private garden in London.

At the Library Time Machine you can see some charmingly amateurish paintings of the inside of the house in 1817-18, and learn more about the history of the house. Owned and occupied briefly by the local developer Joshua Flesher Hanson.

This section lists the memorials where the subject on this page is commemorated:
Aubrey House

London County Council Aubrey House stands on the site of Kensington Wells an ...