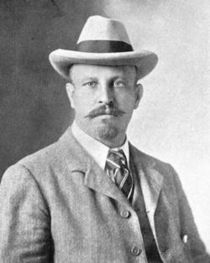 Co-founder National Sporting Club. Born Arthur Frederick Bettinson at 8 Edward (now Aquila) Street, Marylebone. Brought up in Hampstead. Keen sportsman. 1882 became the British Amateur Boxing Association's lightweight champion. 1891 using his own funds he joined with Fleming to open the National Sporting Club. On Fleming's death in 1897 Bettinson took over as Managing Director. One of his sons, Lionel, succeed his father in this role. Bettinson published a number of books on boxing. Died at home, Fairfax Road, south Hampstead.

He got his nick-name through an attempt at gender shaming by his mother. She tried to break him of his left-handedness by saying that only a girl would eat like that, and so they called him Peggy. He clearly embraced the name but we can't discover if he showed equal perverseness in retaining his southpawness.

This section lists the memorials where the subject on this page is commemorated:
Arthur 'Peggy' Bettinson

This building was once known as the National Sporting Club, March 1891 - Octo...

Wisden's Almanack, the 'Bible of Cricket' was first published by John Wisden....

Originally formed by members of the Glyn Cricket Club. Playing under various ...