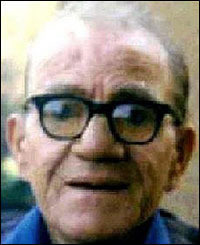 Alexander Williamson Fallon was born in 1914 in Falkirk, Scotland. He was married with four daughters. His wife, Janet, died about 1974 and he drifted into homelessness in London in the 1980's.

His body was not identified and he became known as Body 115 from the tag attached to his toe in the mortuary. He was buried on 11 November 1988 together with Ralph Humberstone, whose body was also unclaimed, in a joint grave in the Islington and St Pancras Cemetery, 278 High Road, East Finchley, London, N2 9AG.

it was not until January 2004 that his identity was discovered when his skull was reconstructed by forensic scientists using the remaining bone fragments and clay. It was discovered that a small piece of his skull had been removed during brain surgery a while before the fire, and a unique ‘Sugita’ metal clip had been inserted.

This section lists the memorials where the subject on this page is commemorated:
Alexander Williamson Fallon