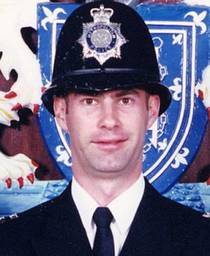 From Police Memorial Trust: "PC Gary Toms and a colleague were in a marked police car in Ashlin Road, Stratford when they began to follow a car that had been reported as being used in a burglary in which a firearm was seen. The driver of the car rammed a number of police vehicles in an attempt to evade capture. It was whilst trying to stop the suspect's car that PC Toms sustained a fatal head injury from which he died six days later in hospital."

To us it seems unlikely that the chase started in Ashlin Road, since the memorial states that Toms fell in Ashlin Road. The BBC describe the chase in more detail, and more believably.

This section lists the memorials where the subject on this page is commemorated:
PC Gary Toms